PROBLEM: God is represented in the Scriptures as someone who “is no respect[er] of

this verse tells us that God “did not respect Cain and his offering,” which seems

contradictory to the other verses.

SOLUTION: First of all, in the fundamental sense of the word, God respects every

If He didn’t, He would not be respecting Himself. But, when the Bible says God is no

respecter of persons, it means that He does not show partiality in meeting out His

justice. As Deuteronomy 10 puts it, He “shows no partiality nor takes a bribe” (v. 17

). In other words, God is completely fair and even-handed in His dealings.

However, there is a sense in which it can be said that God does not respect some

persons because of their evil deeds. God “did not respect Cain and his offering ” (

of their person, but because of their practice. As John told the believers at Ephesus,

they should “hate the deeds of the Nicolaitans” ( Rev. 2:6 ). God loves the sinner, but

قبل Why does Peter’s confession here differ from that recorded in Mark and Luke? MATTHEW 16:16
بعد Why wasn’t Cain given capital punishment for the murder he committed 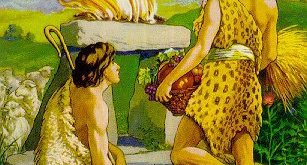