When many people read the Old Testament they get the impression that God is a God of wrath and judgment, but in the New Testament, they find a God of love. Why is there this difference in Scripture?

This question has bothered Christians for a number of years. In the period of the church fathers, Marcion pointed out this problem and suggested that the Creator God of the Old Testament was an inferior being to the God and Father of Jesus. He then set about to remove from the New Testament any influences from this “Jewish” Creator God (for example, in Gospels like Matthew), for the Creator was evil.

He ended up with a shortened version of Luke as the only Gospel we should use. The church’s response was to reject Marcion’s teaching as heresy, to list all of the books it accepted as part of the canon and to assert that all of these were inspired by the one and same God. Still, Marcion’s question remains with us.

The reality is that there is no difference between the images of God presented in the Old and New Testaments. John points this truth out when he states that “No one has ever seen God, but God the One and Only, who is at the Father’s side, has made him known” (Jn 1:18). What John is pointing out is that what one sees in Jesus is precisely the character of the Father, the God of the Old Testament.

There is no difference among them in character; to meet one of them is to meet them both. Thus Jesus is no more loving than his Father. The Father is no more judging than Jesus. All New Testament writers see a similar continuity between the Old Testament God and the God they experience through Jesus.

There are three points that we can make to expand on this statement: (1) there is love in the Old Testament; (2) there is judgment in the New Testament; and (3) the main difference is a difference between judgment within history and judgment at the end of history.

First, there is love in the Old Testament. God does not present himself first and foremost as a God of judgment, but as a God of love. For example, look at Exodus 34:6–7:

And he passed in front of Moses, proclaiming, “The Lord, the Lord, the compassionate and gracious God, slow to anger, abounding in love and faithfulness, maintaining love to thousands, and forgiving wickedness, rebellion and sin. Yet he does not leave the guilty unpunished; he punishes the children and their children for the sin of the fathers to the third and fourth generation.”

This is God’s fundamental presentation of himself to Moses. This is who he is. Notice how he first states his compassion, grace, love, faithfulness and forgiveness. He then notes that this is not to be taken advantage of, for those who do not respond to his love will not escape. He is loving, but he is not an indulgent parent. He will bring justice.

Throughout the Old Testament God continually tells people that he chose Israel out of love, not because they were particularly deserving. When Israel rebels, he reaches out through prophets. When they continue to rebel he threatens (and then sends) judgment, but in the middle of it we find verses like Hosea 11:8, “How can I give you up?” God is anguished over the situation.

On the one hand, justice demands that he act in judgment. On the other hand, his loving heart is broken over his people, and he cannot bear to see them hurting and destroyed. As he portrays in Hosea, he is the husband of an adulterous wife. What he wants to do is to gather her into his arms, but he cannot ignore her behavior. His plan is not ultimate judgment but a judgment that will turn her heart back to him so he can restore his “family.”

This is not God’s attitude toward Israel only. In Jonah 4:2 we read:

He prayed to the Lord, “O Lord, is this not what I said when I was still at home? That is why I was so quick to flee to Tarshish. I knew that you are a gracious and compassionate God, slow to anger and abounding in love, a God who relents from sending calamity.”

Jonah is unhappy about God’s grace toward Nineveh. He was apparently quite happy about announcing that in forty days Nineveh would be destroyed, but when they repent and God forgives them, he is upset. This is not a new revelation to him, for he says, “Is this not what I said?” He seems to have hoped that if he did not deliver the warning, the people of Nineveh would not repent and would be destroyed.

But God made him deliver the warning so that they would repent and he could forgive them. Jonah’s complaint is, “You are too nice, too loving, too forgiving.” That is the way God is portrayed with respect to a violent pagan nation, Assyria.

Jonah and Hosea are also clues to reading all of the judgment passages in the Old Testament. God is not in the judgment business but in the forgiveness business. Yet he cannot forgive those who will not repent. So he sends prophets to warn people about the judgment that will inevitably come, his hope being that the people will repent and he will not have to send the judgment.

When his prophets are killed and rejected, he often sends more of them. It can take decades or even hundreds of years before he comes to the point when he knows that if justice is to mean anything at all, he must send judgment, even though he does not enjoy doing so. And even then he often sends with the judgment a promise of restoration. Every good parent knows that they must eventually punish an erring child, but no such parent enjoys doing it.

He is the one who spoke the warnings in Matthew 7:13–29 and 24:45–25:46. Indeed, Jesus talks about judgment more than anyone else in the New Testament, especially when we realize that Revelation is “the revelation of Jesus Christ” (that is, a message from Jesus).

In the Old Testament God sent the prophets with solemn warnings of judgment and also revelations of the heart of God, who was even then ready to receive repentant people. In the New Testament God sends apostles and prophets preaching the gospel, calling people to repentance in the light of the coming judgment of God. In this respect the two Testaments are in complete unity.

Third, there is a difference between the Testaments in their portrayal of judgment. In the Old Testament judgment normally happens within history. When Israel sins, they are not told that they will go to hell when they are raised from the dead, but that they will be punished by the Midianites or the Assyrians.

Therefore there are many judgments in the Old Testament. In Judges, the Canaanites, Moabites, Midianites, Ammonites and Philistines are all used to punish Israel. Later on it is the Arameans, Egyptians, Assyrians and Babylonians. In other words, Israel “graduates” from being judged by the use of relatively local groups of people to being judged by the use of great empires. Yet in each case, the judgment happens within history.

It does not happen at the end of time but is already written about in our history books. Even with respect to Daniel most of what he predicts takes place in recorded history in the story of the conflicts of the Seleucid and Ptolemaic dynasties between 300 and 164 b.c.

Because of this difference from the New Testament, Old Testament judgment generally does not talk about eschatological scenes like lakes of fire and the dissolving of the heavens and the earth or the falling of stars or eternal chains. Instead, it gives vivid pictures of fearful events that the people living then knew all too well, such as famine, plague, marauding armies and the like.

It is unpleasant for us to read the prophets spelling out the details of such events, but they were the realities of life then (and for much of the world, also today). Furthermore, God is spelling them out so that people can repent and avoid them, not because he enjoys them.

Related to these descriptions is the fact that in the Old Testament the idea of an afterlife was only partially revealed and even that revelation comes toward the end of the Old Testament period. Most of the time the people thought of death as going down to the shadow world of Sheol where there was no praise of God and at best only a semilife.

What they hoped for was to die at a ripe old age with a good name, having seen their children and grandchildren, who would carry on their name. Therefore the judgments in the Old Testament are those which speak to such hopes: warning of whole families being wiped out or of people dying when they are still young.

By the New Testament period God has revealed a lot more about the future life. Therefore the judgments spoken of there are the judgments related to the end of history and the resurrection of the dead: eternal life or being thrown into hell, seeing all that one worked for being burned up or receiving a crown of life. All of these take place beyond history, when Christ returns, and thus when history as we have known it has come to an end.

تقييم المستخدمون: 5 ( 1 أصوات)
الوسوم
Ammonites Arameans Assyrians Babylonians Canaanites Egyptians God of the Old Testament how does god show his anger images of God Judges judgment judgment in the New Testament Midianites Moabites Philistines types of judgment what is the anger of god why is god so angry in the bible why was god angry in the old testament
شاركها
فيسبوك تويتر بينتيريست سكايب ماسنجر ماسنجر واتساب تيلقرام مشاركة عبر البريد طباعة 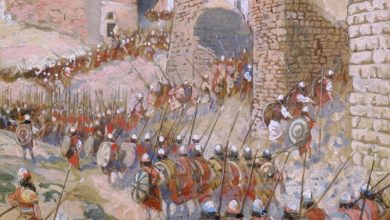 The Slaughter Of The Canaanites By God’s Command